Zekeriyaköy, one of the oldest villages of Sarıyer, is adjacent to Maden, Bahçeköy, Uskumruköy, Demirciköy and Rumelifeneri. Zekeriyaköy, named after the yacht Zekeriya Baba, is topographically located in the valley behind Kilyos. Although it is not known exactly when Zekeriyaköy was founded, it is known that its history goes back to the 18th century.

As a result of the great migration wave caused by the war during the 93 War, several families originating from the Caucasus and Crimea were settled in Zekeriyaköy. There are estimates that these few families are from Zekeriyaköy, located in the Ardanuç district of Artvin. In addition, it has received immigration from the Black Sea Region over time.

Until the 1980s, it was a village and a recreation area consisting of about 70 houses with 2 floors and gardens, but it entered a radical change process, especially from 1987 onwards. While the face of Zekeriyeköy started to change rapidly since the 1990s, it became an important center of attraction especially after the Gölcük Earthquake. It has turned into a region of high-income Istanbul residents, who prefer a quiet environment close to the city center, and housing complexes of expensive villas. Although its population exceeds 10,000 today, it is still a forest village. 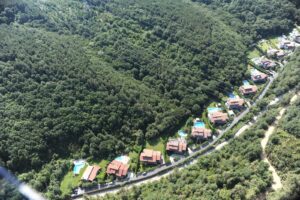 The name of the village is referred to as Kiraz Köy in some ancient sources because it has many different types of cherries such as sultani, dalbastı and dragaani. The main historical artifacts in the village; The fountain under the great plane tree in the village is the wife of Sultan Avcı Mehmet (IV. Mehmet) and Sultan III. It was built by Ahmet’s mother Emetullah Valide Sultan in 1745. It lost its historical character after repairs.

Its last repair was done in 1994 and has been restored to its present condition. The location of Hüseyin Ağa Fountain (1764), which is in the form of a square fountain, was changed twice due to road construction works, and it was completely destroyed in the third time. Soguksu Fountain (1793) is also one of the important historical monuments. The real name of this fountain is Ziştovi Ayşe Hanım Fountain. The fountain is preserved where it was first built. It is Kirazlı Bahçe Fountain (1927).

It is 9.5 km from Büyükdere Avenue, 6 km from Sarıyer district center and 4.5 km from Kilyos. 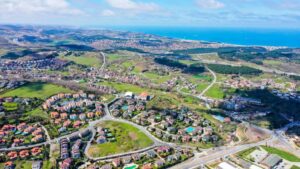 Hello! I would like to get information about properties for sale/rent.